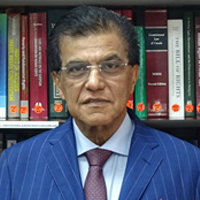 Mr. Ramesh Lawrence Maharaj, Senior Counsel was called to the Bar of the Honourable Society of the Inner Temple in London, England on 23rd November 1966. He did his pupilage in London and returned to Trinidad and Tobago in 1967 where he was Admitted to Practice.

Mr. Maharaj as a practising attorney-at-law was involved in social work both at a community and national level and he was very active in the Human Rights Movement.

Mr. Maharaj entered politics in 1991 and was a Member of Parliament; he also served in the Opposition and in Government as an Opposition Chief Whip and as Leader of Government Business respectively. Mr. Maharaj also served as an Attorney General and Minister of Legal Affairs.

He also practiced law at all levels of the Court system in Trinidad and Tobago, before Courts in the Eastern Caribbean, the Caribbean Court of Justice and before the Judicial Committee of the Privy Council.

As Attorney General Mr. Maharaj piloted in the Parliament, several laws which promoted openness, transparency and accountability in relation to governance. These laws included the Freedom of Information Act, the Equal Opportunity Act and the Judicial Review Act. He also piloted legislation to amend the Constitution of Trinidad and Tobago to reform the Committee system of Parliament in order to make Joint Select Committees of Parliament monitor and scrutinize Ministries of Government and all State agencies.

Mr. Maharaj as a practising attorney-at-law appeared in several cases in which landmark decisions were given, in particular, constitutional and judicial review cases in which the decisions in those cases contributed to the development of the law and the local, regional and commonwealth jurisprudence.